In our last blog post we discussed spring nitrogen in two parts: why we may see increased variability this year, and how we can try to manage it.

Many growers have already implemented at least one of the strategies we touched on previously – such as spring soil sampling – or they are starting to call and ask questions about which of these management practices could be implemented on their farm later on in the growing season.

Some soil tests have already come back from sampling done early last week
(before the seemingly endless rains we got towards the end of the week…).

This raises the question: are nitrogen levels really changing? 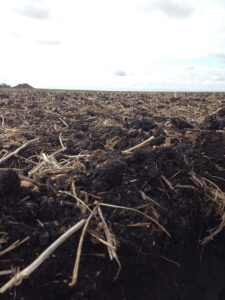 In early test results we found a few fields with higher nitrogen than last fall, but in general, we are seeing similar levels or slightly lower which we would expect from normal overwinter losses.

These findings corresponds closely with the trends found by John Heard, Soil Fertility Specialist with Manitoba Agriculture. In general, nitrogen losses seem to be minimal, contained between 10 and 20%, for the time being.
This is a good thing, since major levels of nitrogen may not need to be made up for throughout the season.

It should be noted that all the testing to date has been done on fields that did not have significant flooding. It remains to be seen what losses will be as a consequence of the late flood.

As such, we should still consider monitoring nutrient levels throughout the season with in-season soil and tissue testing, or pre-sidedress soil nitrate testing (PSNT) in corn to ensure we have adequate nitrogen levels for optimal crop growth.

If we think our N levels are variable  or we might be short a small amount, we can  look at utilizing nitrogen-fixing bacterial products that are new on the market.

It is important to note that fields still heavily under water may not bear witness to these same trends, since current data does not include heavily saturated grounds. If  you are worried about potential affects of lost nitrogen as your lower fields begin to dry up, let us know!