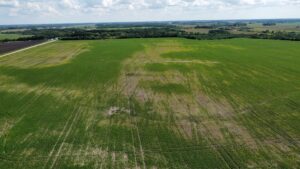 Iron Deficiency Chlorosis, commonly referred to as IDC, is a physiological disorder in which plants – especially soybeans – are unable to take up iron from the soil.
IDC can lead to substantial yield loss within affected areas.

Soybean plants obtain iron from the soil by releasing acids from their roots that help solubilize the iron into a form more readily taken up by the roots. In high pH soils with high levels of calcium carbonate, the fine calcium carbonate particles contact the soybean root and slowly neutralize the excreted acid meant to solubilize iron in the soil. The effect is that the plants cannot take up the iron that is in the soil.

Iron is necessary for the formation of chlorophyll, which is the green pigment in plants necessary for photosynthesis to occur. When the plant does not take up enough iron, chlorophyll synthesis is inhibited and yellowing begins to occur between the leaf veins. Because iron is not mobile in the plant, the deficiency is observed in the youngest leaves first. When weather related, the deficiency may be temporary with no effect on yield. Under more severe conditions, both growth and yield are affected.

Symptoms appear as yellowing young leaves with veins that remain green. The older trifoliate leaves also remain green. IDC can be confused with other problems such as atrazine injury.
With atrazine injury, however, the yellowing will be on the lowest leaves and the upper leaves will retain their green color. Other causes of yellowing that should be considered include nitrogen deficiency, potassium deficiency, the temporary yellowing sometimes caused by mid-season glyphosate applications, and soil carryover injury from Group 2 ALS inhibitor herbicides.
When IDC persists or is especially severe, leaves turn white and plant growth may be severely stunted.

Root rot often occurs on plants suffering from IDC. This is thought to be due to the increased susceptibility of chlorotic plants to root pathogens.
Cysts of soybean cyst nematodes, which are favored by high pH soils, are often found on plants showing IDC symptoms.

Research indicates that the following variables are associated with IDC problems:

In-season rescue options for IDC are limited, so waiting until the plants recover on their own is the most common practice. The best method for IDC control is prevention, in which selection of tolerant varieties is the primary option. Other options for control include heavier seeding rates, improved drainage, and practices that reduce soil N levels, such as cover cropping.

Soybean cultivars vary in their ability to acidify their root zone and take up iron. If your soil test carbonate and soluble salt levels meet at a “high” risk category in Table 1, aim to select a tolerant variety, designated by the Manitoba Pulse & Soybeans Growers Association. A combination of high soluble salt (>1.0 mmhos/cm) and carbonate (>5.0%) concentrations in the soil indicate an extreme risk of IDC. 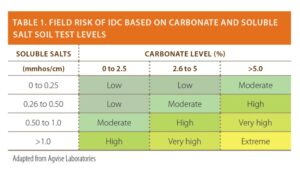 Iron chelate products are also on the market for IDC prevention. Research from North Dakota State University has shown that in-furrow iron chelate products, such as Soygreen (2-3 lb/ac of FeEDDHA) can offer some protection. However, significant yield loss can still occur when varieties are susceptible to IDC. As well, foliar sprays have proved to be ineffective, since iron is unable to translocate within the plant.

If chlorosis is present early on and plants recover by the V5 to V6 stages, yield loss will be minimal, but if symptoms persist beyond these stages, more significant yield loss is likely to occur.

In summary, there 4 main ways of combating IDC on the farm: