I was out checking the nodulation on a few soybean fields this week and I hadn’t fully realized just how dry it was out there. It was hard enough that I needed all of my 220lb frame to push the spade into the ground. Eventually I bent my spade, but it got me thinking about soil available moisture for next year.

Soil available moisture is not something we normally think about in the Red River Valley because we usually have too much. Evidently our clay soils can hold a lot of water because I am guessing there are not too many soils that can grow 80+bu wheat on 2″ of growing season rainfall.

When describing soil moisture, there are a few terms relating to plant growth borrowed from the Manitoba Agriculture Website:

What are the current levels of available moisture?

The following chart (also borrowed from MB Agriculture)  shows how to estimate available moisture by feel.  Here are a few soil cores pulled form a field this season:

The top is summer fallow that still has decent moisture reserves. Most depths will form a ball under pressure and ribbon out, placing the available moisture at 50-70%. 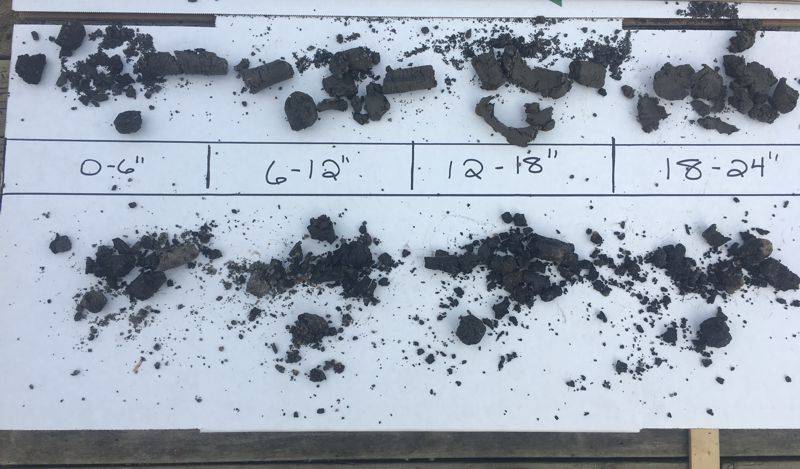 The bottom is a core from a canola field across the road. Most of the depths can barely form a ball under pressure, putting us well below 50% available moisture.

What’s in store for next year?

We will need significant rainfall this fall or over the course of the next growing season to replenish available moisture. If we go into next season with less than 50% available water, we might need anywhere from 10-15 inches of rainfall, assuming none of it runs off the field.  We will have to assess available moisture levels after snow melt to determine yield potentials based on probability of rain.